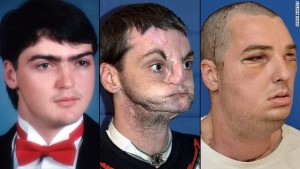 This past week The University of Maryland announced the successful outcome of the most extensive full face transplant ever. There are several fascinating things about the recent wave of Complex Composite Allograft Transfers (translated: transferring tissue from one human to another as a mass of different types of tissues in one large block – i.e. skin, fat, muscles, bones, teeth, nerves, etc.). The most recent trend is towards face and hand transplants.

It’s so easy to overlook the complexities and intricacies of a massive surgery such as this when viewing before-and-after photos from a computer; gushing over the transformation, and gasping at the surgery length of time. It’s fun to imagine exchanging looks with a supermodel, but no one ever talks about the impact that a surgery such as this would have on a person’s day-to-day life. Now I do want to preface that a decision about surgery is simple when facing an injury such as a gunshot to the head. However, these advances in technology make me envision a time in our future when transplanting one’s face is as common as liposuction. What will we take for granted then, and what will we not consider?

First is the psychological effect of having a completely different face. The “who am I factor” would be overwhelming to the recipient. As would the haunting feeling of the other person who gave his face, and is now peering back in the mirror. Someone, somewhere would look at this person and see a loved one who is actually dead.

The other topic not often thought about by the lay public is that these recipient patients typically have to be on anti-rejection drugs for the rest of their life, just like a kidney or heart transplant patient. This is not only very expensive, but there are several dangerous side-effects. This also does not even begin to examine the ethical questions of who pays for this surgery (patient or the insurance company), and is a candidate justified in his reasons for a transplant.

As a side note, a recent article in The Journal of Plastic and Reconstructive Surgery (February edition) by Curtis Cetrulo, et al from Harvard, circumvented the need for anti-rejection drugs using a novel gene therapy to convert the donated tissue, into tissue that the patient’s body recognizes as its own and will not reject. The study was done in lab rats, but laid the experimental basis for similar work in humans.

The day may not be far off when very large parts of one person are transferred to another without the lifelong drugs that are now routine and often overlooked by the public. I can guarantee you these things are not overlooked by the patients. #VeryExpensiveLifeChange